Our Mission: Encourage voters to help generate and maintain the necessary funding that creates an educational environment allowing SUSD students to succeed while continuing to keep teachers’ salaries competitive.

Yes To Children is an all-volunteer, non-profit group.  We were established in 2000 and have had a strong working relationship with SUSD ever since.

The Scottsdale Unified School District was founded in 1896 by Winfield Scott.  Major Scott was also the founder of Scottsdale.

The first SUSD classes were held in a 16x18-foot building erected southeast of what is now Brown Avenue and Main Street. Representing eight grades, the total enrollment was 14 students.

The school district’s first bond election was held in 1909.  13 citizens voted “Yes” and no one voted “No.” The bond raised $5,000 and was used to construct a building adjacent to the original school.   The schoolhouse was named Scottsdale Grammar School. 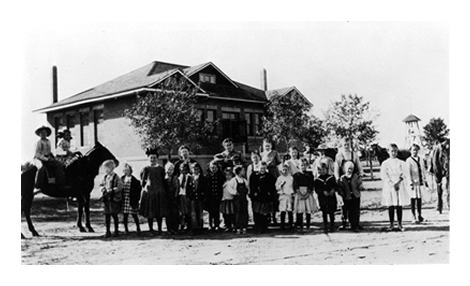 After building Scottsdale High School and a new elementary school, the brick schoolhouse was renamed Coronado School.  Today, the building is known as the “Little Red Schoolhouse.”

SUSD currently has an enrollment of more than 23,000 students at 29 campuses.  The schools consist of 15 elementary, 4 K-8 middle and 5 high schools plus one online high school.

SUSD’s boundaries include most of Scottsdale, most of Paradise Valley and portions of Phoenix and Tempe.